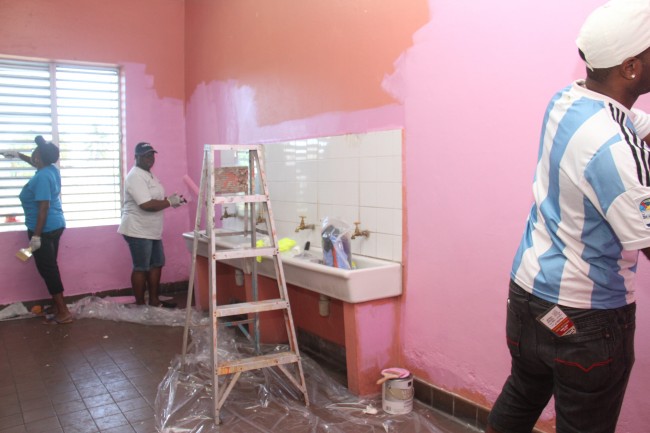 New fixtures and cheerful walls will be greeting the students of Westbury Primary School when the new term begins in less than three weeks’ time.

On Saturday, April 4th, staff of Oran Ltd left their desks and work stations and picked up tools, brushes and cans of paint and spruced up the bathrooms of the St. Michael School. Operations Manager at Oran Ltd., Justin Oran, said staff members formed a social committee last year with a mandate of increasing social engagement within management and staff.

“This is part of an ongoing effort at Oran, not just about volunteerism but to promote social engagement in general,” he said. “A lot of people from the company send their children to Westbury and they felt an obligation to give back,” he added.

Chairman of the Social Committee and Sales Representative at Oran Ltd., Kareem Rowe further explained the idea to refurbish the bathroom came from supervisor Angela Cobham, whose grandchild attends the school.

“Coming to the school over the course of time she realised this was one of the things that needed to be done and she came, brought it to the committee and we said ‘yes, this is something we would look forward to doing,” Rowe said.

Meanwhile, principal Michael Alleyne praised and thanked the staff at Oran. “They came here and asked me what is our priority, so I suggested to them the bathrooms are in a state and they should make that their first priority, ” he said.

“They came and assessed the situation and decided they would replace all the fixtures and also paint the bathrooms so that we will have a good appearance, ” he added.

Principal Alleyne added the school has a roll of 464 students, while parts of the plants could be atleast 100 years old. – Sunday Sun, April 6th 2015 (HLE)